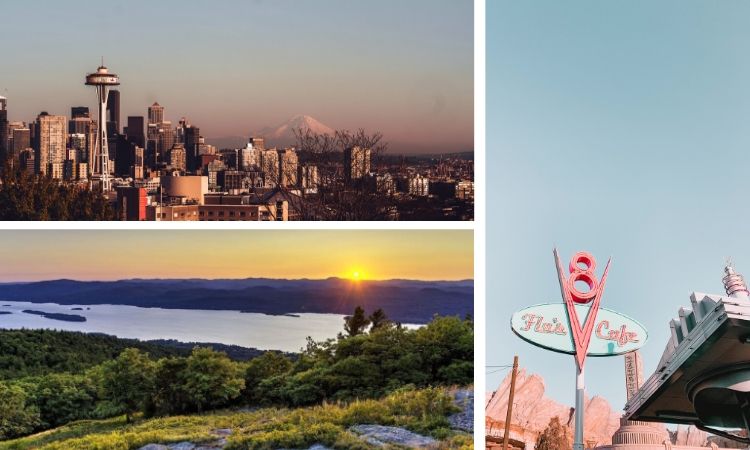 With Memorial Day just around the corner, we are dreaming of summer travels. Knowing our options are going to be limited this year, road trips seem like the way we’re going to get our travel fix this summer. No matter where in the country you live, there is a slice of highway ready for your summer adventures.

We picked out three road trips in different parts of the country that we’ve either done before or would like to do in the future.

Katie: The Other Stretch of I-5

For years, I often spent the holidays in the Seattle area visiting family. One year while visiting, I took a few days to pick up a car and road trip to Portland for a quick visit. It was a winter road trip, so this itinerary below is a combination of the road trip I did before and what I’d like to do in the future.

I’ve had the pleasure of visiting Seattle several times throughout different stages of my life. From strolling the stalls of Pike Place to the great coffee and food scene, Seattle is a great place to start this road trip. If you haven’t visited before, go ahead and take some time to visit MoPOP, aka the museum of pop culture, grab some pierogies at Piroshky Piroshky just in front of the main entrance of Pike Place and grab a cup of coffee at La Marzocco from their rotating list of roasters in residence.

When you’re ready to get out of the city, the natural first-stop for a dose of nature is Mount Rainier National Park, which can be seen from the city on clear days. Having done a few easy hikes when I was younger, I have memories of trails lined with lush green plants and running through snowfall ounce you reach a certain elevation, even in the middle of August. It’s a great park to visit for a day with a picnic lunch in tow.

In stark contrast to the lush greenery of Mount Rainier stands Mount Saint Helens National Volcanic Monument. Following the mountain’s eruption in 1980, the park was established with the intention of allowing the landscape to evolve and grow naturally, without human intervention.

From there, it’s just a two-hour drive to Portland, Oregon. It’s a city with many nicknames, but it’s so much more than its famous “Keep Portland Weird” mural. From Voodoo Donuts to Powell Books and the food cart pods, I really loved Portland. The only time I’ve visited was one year between Christmas and New Years, so I’m eager to get back at some point to see the International Rose Test Garden in full bloom.

If you have a day to get out of the city, the Multnomah Falls Hiking Trail within the Columbia River Goroge, made famous by the Twilight films, is a short drive away. Given it’s popularity, you may also consider one of the other trails within the park or the larger Portland area.

While it was a fun experience, I’m itching to recreate this itinerary one summer to really get the full impact of the beautiful landscapes and max out the city experiences in both Seattle and Portland.

When I was a girl, the idea of a real “road trip” seemed like the plot of a book or movie, a vestige of an old American tradition. My family’s infrequent trips were mainly limited to short excursions to New York’s Jones Beach. The thought of all four of us piling into a cramped car and driving for hours on flat roads was no one’s particular idea of fun.

But years later, after experiencing the existential claustrophobia of a pandemic and self-imposed quarantine, I’ve begun to dream of renting a car and hitting the road. And what better road to follow than Historic Route 66, one of the country’s original highways?

What’s particularly interesting for me is that the route begins in the city of Chicago, which has become something of a second home to me, and ends on the Santa Monica pier, a place I visited years ago. But the miles between are a blank canvas in my mind.

What else awaits in the “Land of Lincoln”, as the road runs diagonally across the state of Illinois? Route 66 winds through Missouri, Oklahoma, Texas, New Mexico and Arizona, all states I’m ashamed to say that, aside from major cities like St. Louis or attractions like Grand Canyon National Park, I haven’t given much thought to until now.

My father visited Oklahoma City for a work trip when I was a girl and the small piggy bank souvenir he brought back sat on my shelf for years, making my feel cultured and worldly yet knowing almost nothing about the “Sooner” State. I’d like to go there myself, retracing his steps and exploring more than he was able to during his short stay.

A friend of mine went to Arizona for a week last year during a rough patch and came back transformed by the experience. From Petrified Forest Nation Park to Sedona, she found comfort in the other-worldly beauty of the red rocks, and inner peace wandering the hiking trails of the desert landscape.

At times like these, I crave the respite to just get out and see; instead of having my usual densely packed schedule, to just be present in the moment and appreciative of the geological wonders that surround me.

Though I suspect the things that would most interest me wouldn’t necessarily be easily found on a map. At the moment, nothing sounds more appealing than taking a break from the bustle of crowds, or the solitude of home, and finding a nice diner on a quiet street in an old town, owned by friendly locals. If anyone would know what places are not to be missed in the area, it would be them.

Any car journey lasting more than 20-mins is always quite a feat with my young kids, so when my husband and I planned our summer camping road trip from New York City to Quebec, we figured we’d be learning a few lessons along the way. And we knew that one of those lessons could be: never again.

Now we are sitting in isolation reflecting on how incredible that trip was, and planning a similar adventure for as near as the future will allow.

Last year’s epic road trip took us along the Hudson River, stopping in Kingston to pick up a picnic lunch from the farmer’s markets, then continuing North tracing the state border between New York and Vermont.

Just under four hours later when the kids were melting down, we stopped at the beach in Plattsburg, NY where we frolicked in Lake Champlain in the late afternoon sun.

We then forged on to Montreal, arriving at our roadside hotel by nightfall. The next morning, we continued North, via Saint Sauveur for fantastic coffee at Cafe White et Compagnie, and on to Mont Tremblant National Park, where we pitched a tent for a few nights.

The park was very remote. The kind of remote where there is no cell reception to call mechanics in the nearest town (40-mins away) when your car breaks down. But it had a visitor center kitted out with wifi and super friendly rangers. We fell asleep to the howl of loon ducks (that might have been wolves) and woke with a dip in the lake and local coffee, freshly brewed over the campfire.

From there, as the weather was forecast to turn, we headed to a spot near Lac Tremblant for a few nights to do our laundry and enjoy a few home comforts – like lake views, cozy local eateries, warm showers and a pool!

After one night in Montreal again where we enjoyed a drumming jam in Jeanne-Mance Park and some shopping in the Mile End, we headed back over the border and into lush Vermont, for another three nights camping at Little River State Park, just out of Stowe.

Stowe is picture-perfect summer: cycling alongside rivers bordered by mountains, and lawn games in brewery gardens with other friendly travelers at sunset. We could have spent weeks camping, hiking, cycling, drinking and eating our way through Vermont (wifi wasn’t too hard to come by either), but we had to head back home to the city. After stopping at Lake George to watch the paddle boats, we set up camp at Moreau Lake State Park, and the next day continued on to Beacon, NY to enjoy our favorite stretch of boutiques and breweries (and catch up with friends).

The whole trip took two weeks, but we could have stretched it out a lot longer, and enjoyed staying on one campsite for a period of a week or so. We returned to New York feeling, yes, a little smelly after all that camping, but refreshed and full of life.

Our lesson from the trip was: yes, we must do it again, and we are itching for the chance to head as far north towards the border as we can soon. 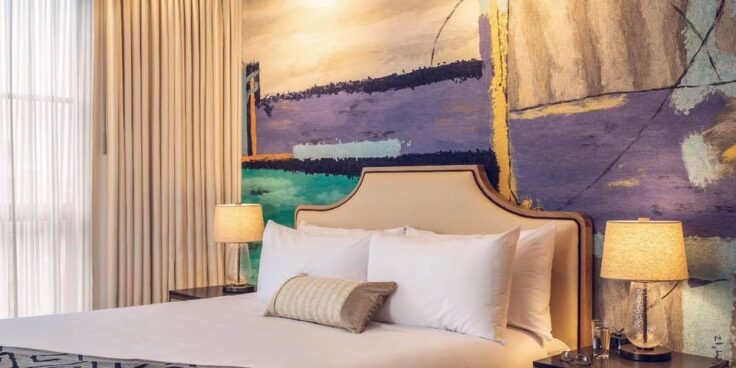 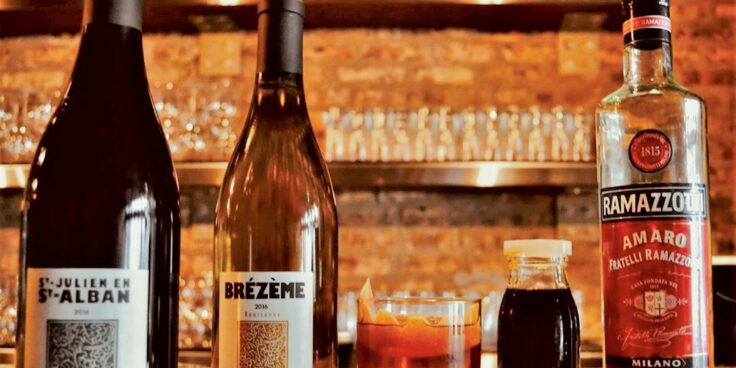 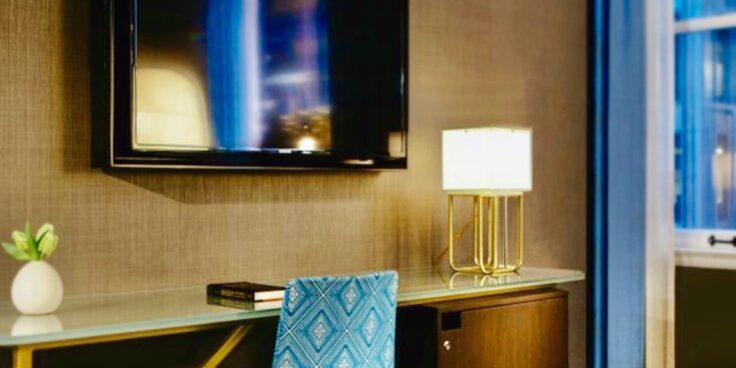